This month, P-Plus, a magazine for Corporate Social Responsibility in the Netherlands, published a special edition on FMO’s Climate Finance projects:

Based on the calculations that industrialized countries need to invest 100 billion USD annually to help developing countries with climate adaptation, the Dutch Court of Auditors estimates that the Dutch climate change bill will be EUR 1.25 billion annually. About half of these investments will need to come from public funds, the other half from private investments.

FMO is one of the most important instruments of Dutch climate policy focussing on developing countries. In the coming year, FMO wants at least 32 percent of all its investments to be "green". Meaning: investments focused on sustainable energy, less CO2 emissions and resistant to climate change. To achieve this goal, FMO uses a number of innovative funds to help emerging countries, such as Kenya, to realize wind farms, solar parks, hydropower plants, and agroforestry. These investments are aimed at attracting private investors.

FMO demonstrates that investing in sustainable energy and the climate is not only wise but can also be profitable. Revolving funds such as Building Prospects (formerly known as Infrastructure Development Fund) and the Access to Energy Fund achieve very high repayment percentages, well above 100 percent.

Building Prospects fund manager Floor van Oppen explains how it works: “We have evaluated our first activities in forestry projects and concluded that it is a difficult sector, but also a very important one. That is why FMO installed a dedicated team looking for interesting investments in this area, that the Building Prospects fund can co-invest in alongside FMO. This way, we hope to attract other commercial investors. That is how it is supposed to go with climate adaptation as well. We ‘boost’ a certain sector, after that, the market needs to take over.”

“As FMO, we want to contribute to limiting global warming to 1.5 degrees”, says Van Oppen. “We do not only focus on avoiding CO2-avoidance, we also invest in sectors that extract CO2 from the atmosphere. Forestry projects do that most effectively. That's why we invest more and more in that area.” At the end of 2018, the government fund managed by FMO received a new mandate from the Dutch Ministry of Foreign Affairs, including a top-up of EUR 100 mln. A new strategy has been formulated as part of the mandate renewal, directing investments to agribusiness, infrastructure and climate change mitigation and adaptation. The fund invests in renewable energy projects that are facilitating rural areas that are not connected to the grid. Building Prospects either finances project directly, like for example the Kivuwatt-station in Rwanda, or indirectly, like in the Africa Renewable Energy Fund.

Another fund set up by FMO, Climate Investor One, is aimed at a start portfolio of around twenty projects. Fundraising is going well and they are moving towards thirty projects. CIO, a fund for sustainable energy generation in developing countries is one of the largest in its field, with a portfolio of over 800 million dollars. This fund promises an attractive return on investment and already fourteen investors have entered. The initiators include governments such as our Ministry of Foreign Affairs, the European Union, the Nordic Development Fund and USAid, plus development banks such as Findev Canada and soon the African Development Bank (ADB). 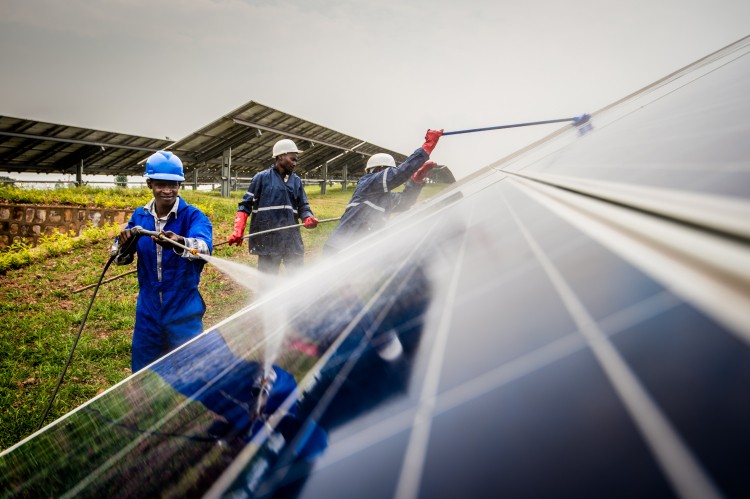