The Nigerian agricultural sector represents a quarter of the country's economy, but it is far from reaching its full potential.

Low productivity due to poor planting material, low fertilizer usage and a weak agricultural extension system are some of the reasons hindering the development of the sector and smallholders' livelihoods.

Established in 2012, the agricultural enterprise Babban Gona (“Great Farm” in Hausa) aims to mitigate some of the problems by providing end-to-end services to farmer networks in Northern Nigeria using the Smallholder Partnership model. In 2017, FMO extended a USD 4mln loan to Babban Gona via MASSIF, the financial inclusion fund that FMO manages on behalf of the Dutch government.

In 2019, FMO decided to commission an independent impact evaluation of the Babban Gona model. We took a different approach: a so-called process evaluation, focusing on understanding the farmers' experiences and expectations and how the model has been implemented rather than measuring the model's outcomes as regular evaluations do. This is particularly relevant as the Smallholder Partnership model is innovative and has high growth targets.

Through the Smallholder Partnership model, Babban Gona aims to raise productivity and incomes via four main services: i) access to credit, ii) quality inputs iii) training and education (including the provision of extension services) and iv) access to markets. These services are delivered via Trust Groups consisting of 3-5 farmers, and each group has a leader (TGL) who receives agronomy and business training that the TGL shares with the other members. Babban Gona's field officers (MIKs) check in on each Trust Group, flag any issues and ensure farmers are on schedule with their crops. In 2020, Babban Gona worked with about 40,000 farmers.

The study found that most farmers (80%) expressed satisfaction with the Smallholder Partnership model, and 89% said they would enrol for the next season. Some of them (63%) said they joined the Babban Gona project because it provided quality inputs and 49% already saw improved crop yields. The study also revealed that the majority of them (91%) would recommend Babban Gona to others.

About half of the farmers indicated that their income increased after enrolling in Babban Gona. The farmers who experience increased income (83%) reported using the increased revenue to buy more food for their families, highlighting Babban Gona's contribution to improving food security (SDG 2). Others used the extra money to acquire more farmland, invest in irrigation systems, plant high-value crops, or improve their homes.

Importantly, those farmers not enrolled in the model indicated that they had learned about some of the Babban Gona techniques, and this allowed them to benefit from the Smallholder Partnership model. Thus, Babban Gona has positioned itself as a point of reference within the communities it is trying to serve.

The interaction with field officers was helpful for 90% of the farmers, but not as frequent as they would wish, while a third said they didn't have full access to the relevant information about the program design and agricultural practices, and some perceived a lack of understanding of the Smallholder Partnership program. For instance, although Babban Gona offers insurance for bad harvests due to unforeseen circumstances, few of the farmers were aware of this.

The evaluation concluded that the Smallholder Partnership model was largely implemented as intended and most farmers were satisfied with the model. However there is also room for improvement, including improving the quality and frequency of training and extension services provided to farmers, as well as improving farmers' understanding of the model. We also identified some barriers to farmer retention and scaling up, which need to be addressed by Babban Gona to ensure further expansion.

Upon the completion of the study, FMO and Babban Gona discussed the findings together. The company recognized the challenges identified and had already started implementing changes to address the issues raised in the next farming season, which already showed improvements in member satisfaction as measured in its record retention rates and customer survey response results.

Please click below for the summary of the evaluation 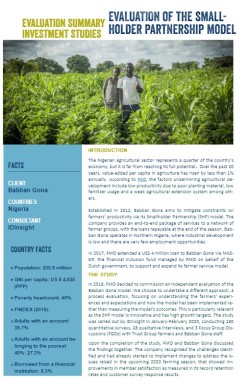 For more evaluations, please go to our reporting center