That is why FMO invests in companies like ZOLA Electric to increase access to energy for households that are not yet connected to a reliable or affordable grid.

End 2018, FMO arranged a financing package (USD 32.5 million) to help grow ZOLA Electric’s service delivery in Tanzania, supporting an additional 145,500 households who do not have access to a reliable and affordable grid. The investment is also expected to create around 2,100 new jobs in off-grid solar. ZOLA Electric currently powers more than 1,000,000 customers across 5 countries and employs more than 1,000 people. 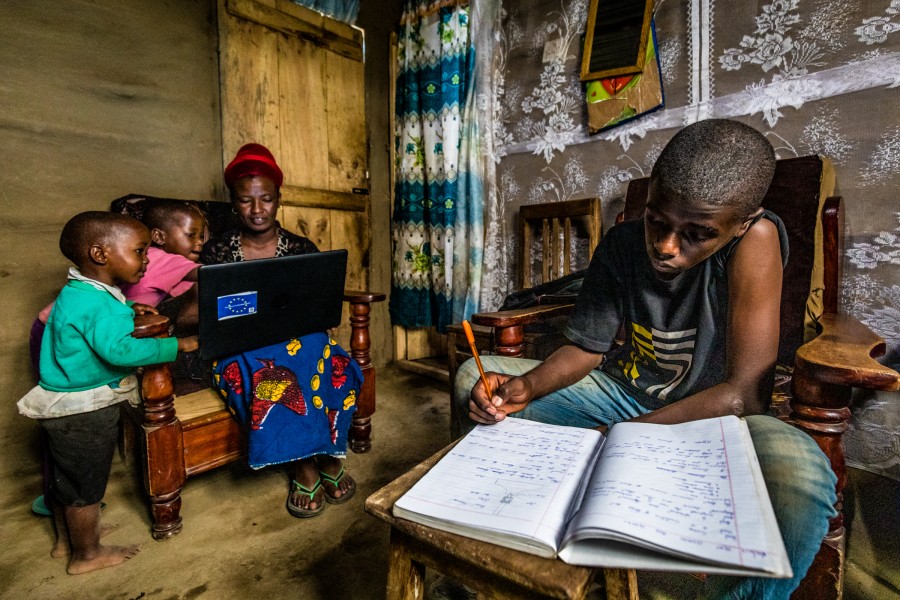 The house of Azaria John (34) and her family is located in the countryside, a one-hour drive from the Tanzanian city Arusha. It’s the region where Maasai herd their goats and farmers grow maize and other crops. There are some power lines, but most of the people here are not connected to the grid. Azaria used to light her clay house with kerosene, which is a very unhealthy fuel when used inside a house. As a result, her son Patrick developed health problems with his eyes.

Azaria’s husband works as a truck driver. Azaria herself earns an income growing vegetables and fruits, which she sells at the market in Arusha. To expand that income, she works as an Mpesa mobile money agent and has a job at Oikos, both in the nearby village. With their joint income Azaria and her husband take care of their own four children and two children of her brother, whose mother abandoned them when they were 3 months and one years old. The house they all live in is not big, but very well maintained and organised. Some years ago, the family bought a small solar panel to get light into the house, so the kids can also do their homework when it’s dark. The panel proved to be too small as did the battery, which was a problem in the rainy season. They wouldn’t have electricity if the sun did not shine for a longer period of time. 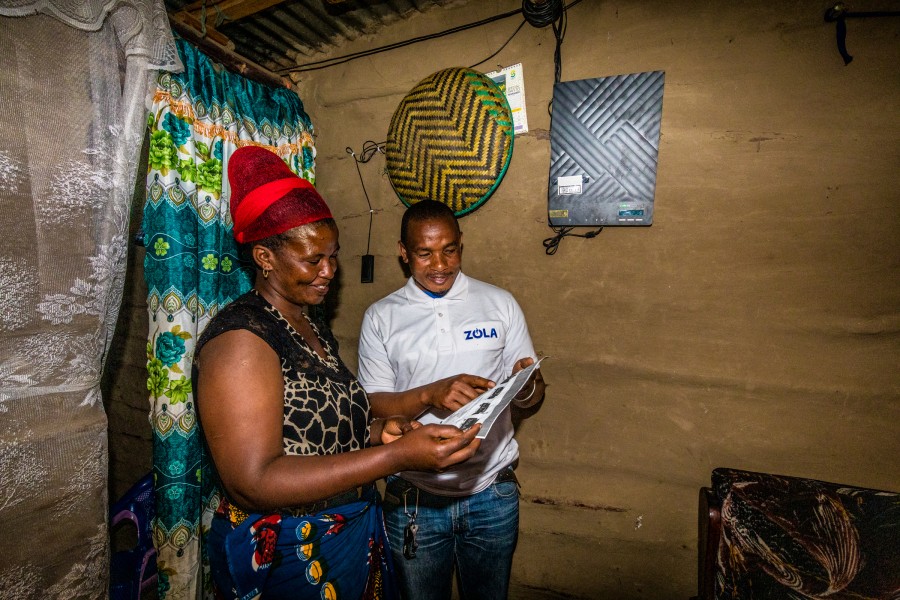 That’s why they changed to a ZOLA system some months ago. Even with the current rains, the electricity doesn’t fail them. They have five light bulbs, a radio, a charging station and a small ZOLA television.

Azaria hopes that in the future ZOLA will also develop a fridge for the solar system, so she can keep her fruits and vegetables fresh. She will be paying for the system in instalments over a period of three years. After that, she wants to buy a second system for her business. She wants to combine the Mpesa agency with a fruit and vegetable shop. With a fridge.

If at some point the electrical grid will reach Azaria’s household, she will continue to keep the family’s solar unit, mainly because the grid has proven to be very unreliable. Her enthusiasm for her solar system is contagious: she advised Editha, the field service officer from ZOLA, to talk with the community, because many people have asked her where they could get a solar kit like she has.

That’s why they changed to a ZOLA system some months ago. Even with the current rains, the electricity doesn’t fail them. They have five light bulbs, a radio, a charging station and the special [AR1] small ZOLA television. With six children and three jobs, the TV is a great asset for Azaria. It helps her to keep the children at home, preventing them to start wandering around when she is busy.[AR2]

Azaria hopes that in the future ZOLA will also develop a fridge for the solar system, so she can keep her fruits and vegetables fresh. She will be paying for the system in instalments over a period of three years. After that, she wants to buy a second system for her business. She wants to combine the Mpesa agency with a fruit and vegetable shop. With a fridge. The monthly payment is 60,000 Tanzanian Shilling (24 euro), which is a significant amount of of money for the family, but without the solar panel she would have to go to the village to charge her phone. The current rate for charging a phone is 500 TZS, around 20 cents, which she already earns back [AR3] on an almost daily basis. 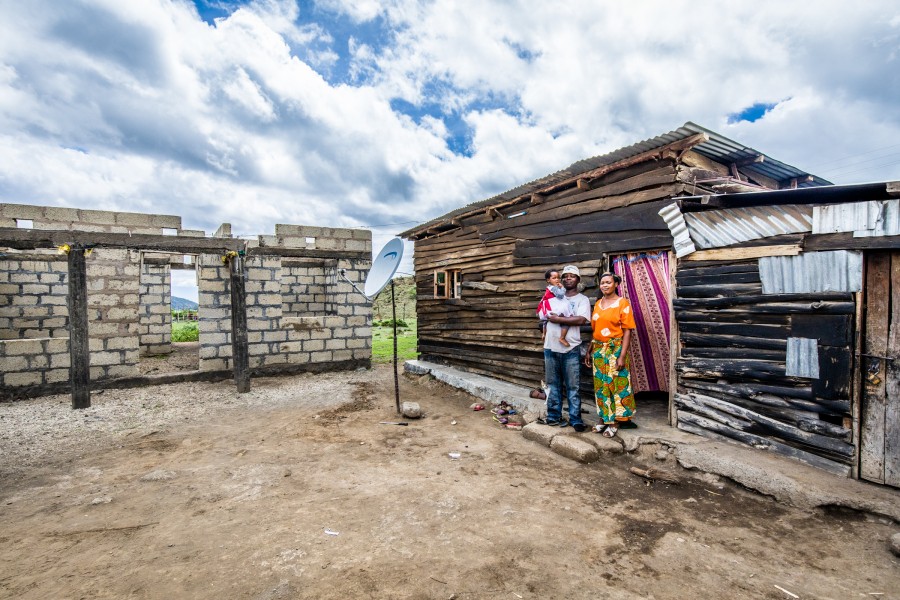 Two months ago, Rogers J. Mollel (34) bought a solar system from ZOLA. He lives in a wooden house close to the main road, together with his wife Aneth and their two children. Even though the house is part of a little community they aren’t connected to the electrical grid and don’t know when that will happen. The family grows maize and potatoes on land where timber has just been harvested, until new trees are planted. Furthermore, Rogers works as a boda boda (motorcyle taxi) driver, to expand the family income.

Before they discovered solar panels, the family used candles and kerosene lamps to light their modest house. When word reached Rogers and Aneth that this approach incurred health problems, they decided to buy a small solar panel. Unfortunately, one that proved to be quite unstable. They bought one panel after another, but all systems broke down fairly often, especially the batteries. When they heard that ZOLA offers reliable systems, they decided to buy a package with a solar panel, a battery, a charging station, a radio and a television. 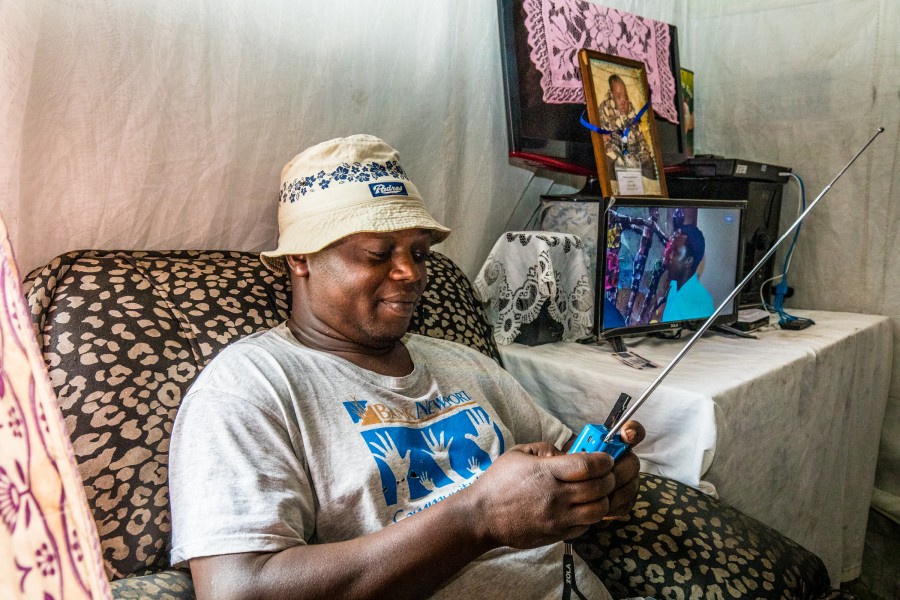 Anna Julius (37), her husband and their four children have an unstable income for their household of six. They farm maize and beans for a living. This year the long rains initially stayed away. When they finally came in January, Anna and her husband planted the maize. Unfortunately, drought returned and their whole entire crop failed. In May the rains came again and for the second time many farmers, including Anna, planted maize. Now they pray for the rains to stay another one or two months, otherwise they won’t have any harvest this year. Despite the unstable income, Anna has created a neat clay house, where she also welcomes the children of her neighbours. 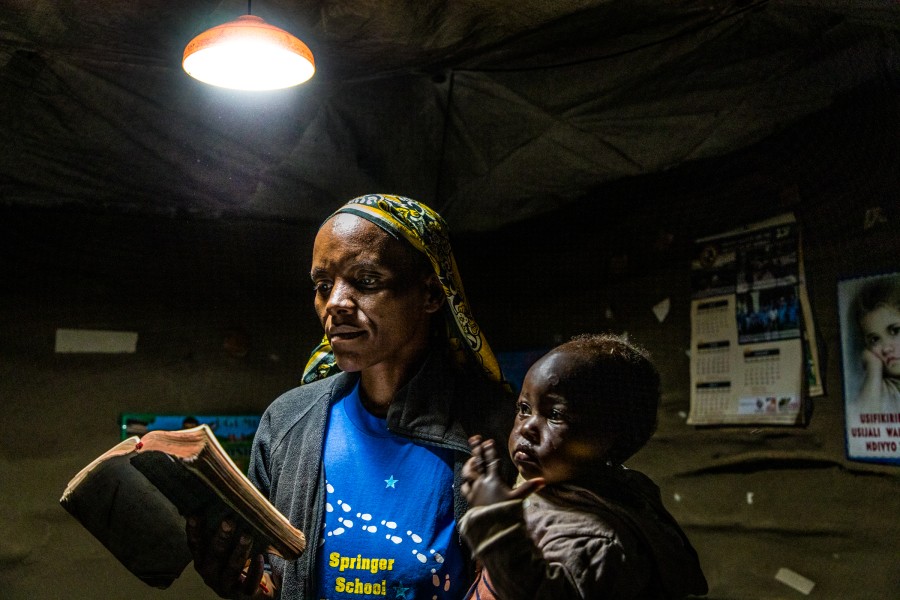 They bought a ZOLA solar system two years ago. The system charges five lights, a charging centre, a radio and a torch. She invested in the system because she knew that the kerosene they used for lightning was damaging her family’s health. Her solar light gives significantly more light than the kerosene lamp used to do, so now the children can also make their homework at night in a healthier environment. She pays monthly instalments of 20,000 Tanzanian Shilling, 700 TZS a day. Before she had the solar panel she used to charge her phone at the village for 500 TZS.

The senior loan FMO arranged for ZOLA Electric consists of USD 5 million from the Access to Energy Fund (AEF), which FMO manages on behalf of the Dutch government, and which mobilized USD 12.5 million from FMO-A and USD 15 million from Symbiotics. The tenor of the loan is five years. ZOLA Electric borrows the money in its local currency, the Tanzanian shilling.

Other sources on the off-grid sector in Tanzania

Tanzania | Freeing the data to build the off-grid sector